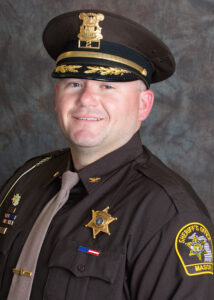 Undersheriff Derrek Wilson is a 18 year veteran of the Mason County Sheriff’s Office. In 1999, he began a career with the Department of Natural Resources Parks and Recreation Division after graduating from the Lake Superior State University DNR Law Academy. In 2003, Undersheriff Wilson graduated from the West Shore Community College Police Academy and was awarded the Outstanding Graduate Award by the Michigan Commission on Law Enforcement Standards (MCOLES).

In 2013, Undersheriff Wilson completed A.L.I.C.E. instructor level certification training in Wisconsin and has used that training to help implement proactive response to active violence training throughout the area schools. Undersheriff Wilson has also worked closely with many local businesses, manufacturing plants and churches on safety and security plans and training.

Undersheriff Wilson is the 2012 recipient of the Michigan Sheriff’s Association Medal of Valor. He has also received the Citation of Bravery and two Live saving Awards.